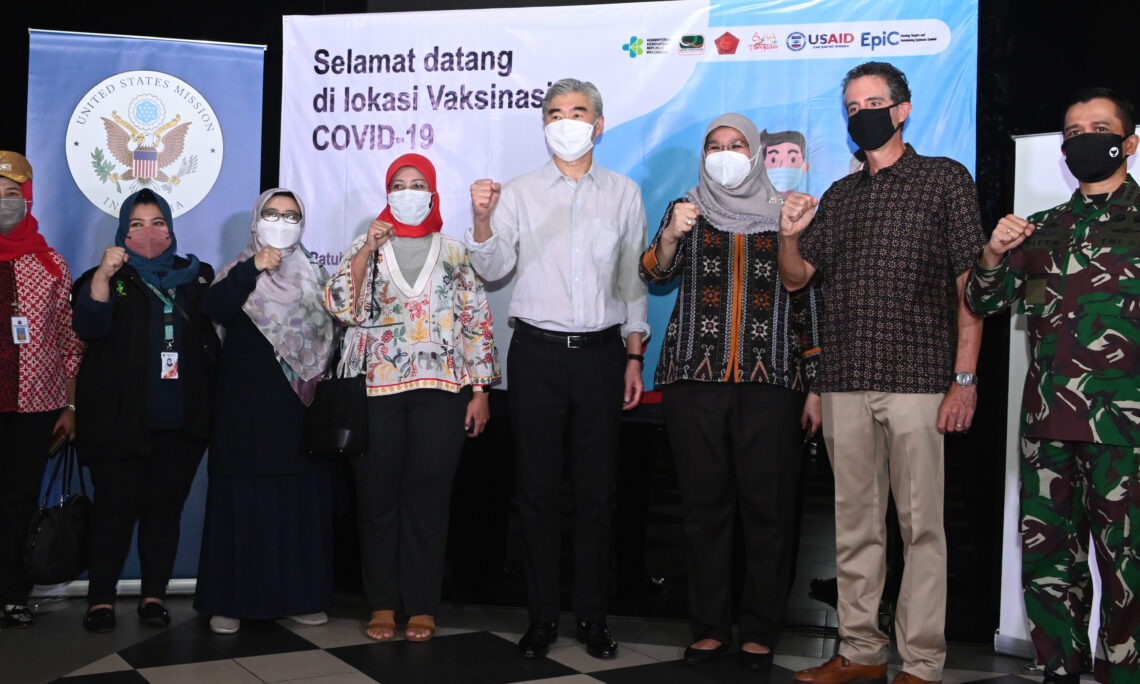 JAKARTA, Indonesia —Standing with the people of Indonesia in the fight against COVID-19, the United States is donating an additional 3.5 million doses of Pfizer vaccine doses to Indonesia in partnership with COVAX.  2,632,500 doses arrived at Soekarno–Hatta International Airport on Saturday, November 20, and 866,970 doses arrived on Monday, November 22.  These safe and effective vaccines will protect lives in Indonesia and help prevent dangerous new variants from spreading.“We are proud of our contributions to Indonesia’s strong COVID response to date,” said U.S. Ambassador to Indonesia Sung Y. Kim.  “Safe and effective vaccines remain crucial to sustaining recent progress, so the United States is committed to continuing to donate vaccine doses to Indonesia, as well as throughout the region and around the globe.  The United States and Indonesia are close partners and friends, and these donations are the right thing to do.”The United States is the largest donor to COVAX, with a total commitment of $4 billion, which has helped Gavi to facilitate the donation of more than 36 million total vaccine doses to Indonesia.  Bilaterally, the American people have donated 16.9 million doses of Moderna and Pfizer vaccine to Indonesia through the COVAX initiative, in partnership with the Government of Indonesia and UNICEF. Worldwide, the United States has already delivered over 200 million doses of COVID-19 vaccines, and hundreds of millions more are on their way.  The United States is donating a total of 1.1 billion Pfizer-BioNTech COVID-19 vaccines to low and lower-middle income countries around the globe.  This monumental commitment means that the United States is donating three doses to the world for every one shot it has administered at home.Since the onset of the pandemic, the U.S. Government has committed more than $77 million to support Indonesia’s COVID-19 response, building on more than $1 billion in health-related assistance over the last two decades. The United States works closely with Indonesia to accelerate COVID-19 case detection and tracking, improve laboratories, disease surveillance, and rapid-response capacity, and ensure that more people know what to do to protect themselves and each other. Since March 2020, our support has reached 165 million people in Indonesia— 60 percent of the country’s population. The United States has helped approximately 43,000 frontline healthcare workers and strengthened more than 1,300 hospitals and clinics around the country.We remain committed to partnering with the Government and people of Indonesia to save lives and work toward the safe reopening of the Indonesian economy.