In her first visit to Jakarta, Under Secretary of State for Economic Growth, Energy, and the Environment Cathy Novelli engaged with Government of Indonesia representatives, private sector, civil society, and youth during a full day of events April 2.  U.S. business representatives shared their views on the  Indonesian business climate at an AmCham Indonesia-hosted breakfast, following by a meeting with Deputy Coordinating Minister for the Economy Rizal Lukman where he and Under Secretary Novelli discussed ways to boost bilateral trade and investment.  Later, she engaged Minister of Communications and Information Technology Rudiantara on  e-commerce and ICT policy, then met with a group of tech leaders to hear their take on Indonesia’s prospects for digital economy growth.  In the afternoon, Under Secretary Novelli discussed wildlife trafficking, marine issues, and broader environmental issues with university students and NGO representatives at @america, and closed out her visit with a discussion with leading Indonesian voices on oceans about mutual U.S.-Indonesia interest in strengthening maritime cooperation to combat IUU fishing, ocean trash, and other marine issues. 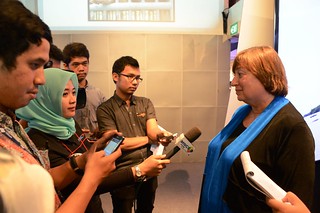