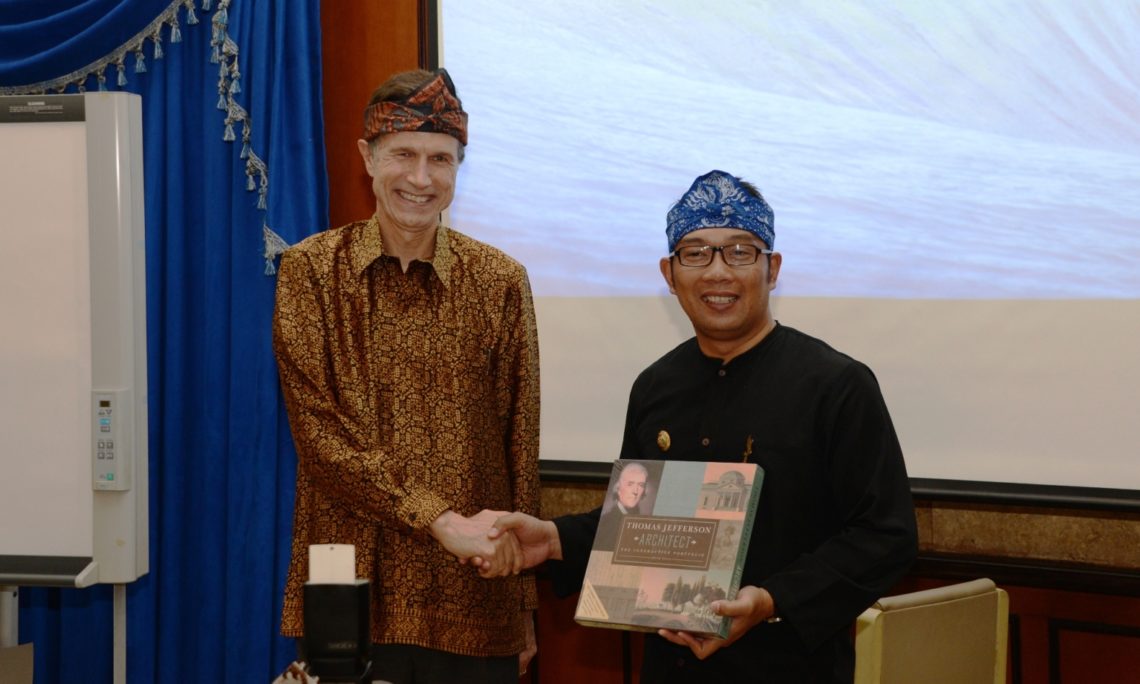 Bandung — On April 2, 2014, Ambassador Robert Blake traveled to Bandung, West Java to promote the business and education pillars of the U.S. – Indonesia Comprehensive Partnership.  Ambassador Blake’s visit is part of his continuing travel across Indonesia to engage local leaders, businesses, civil society and students to advance cooperation and partnership with the United States.

Ambassador Blake arrived on the train from Jakarta at Bandung Station which used a GE locomotive.  In Bandung, executives from PT Kereta Api Indonesia and GE spoke with the Ambassador about the locomotive and how GE, like many American companies with innovative products and expertise, is supporting Indonesia’s connectivity goals.

Ambassador Blake met with Bandung Mayor Ridwan Kamil to discuss opportunities for U.S. companies to partner in the development of Bandung as a technology hub. He was interested to learn about Mayor Kamil’s plans for “smart city” solutions.  The Mayor and Ambassador Blake later discussed opportunities in Bandung with representatives from U.S. businesses interested in partnering with Indonesia as it develops its innovation and knowledge-based economy, including IBM, Cisco, Disney Interactive, Google, Intel, Lahan Energy, Microsoft, and Qualcomm.

At the Bandung Institute of Technology (ITB), Ambassador Blake discussed the Embassy’s University Partnership grant program, administered by the U.S. Agency for International Development (USAID), and encouraged Rector Prof. Akhmaloka to explore new areas of cooperation with U.S. universities.  He had lunch with students studying geothermal engineering on a scholarship program sponsored by USAID in partnership with Indonesian power company Star Energy, the University of Southern California, and ITB.  The program aims to boost Indonesia’s geothermal energy sector.  Ambassador Blake then visited ITB’s American Corner, located in the university’s library since 2008.  The Ambassador said, “I am pleased that through our partnership with ITB we are able to make computers and technology available to the public to find out about the United States at the Corner.”

Ambassador Blake spoke with students and professors at the American Corner, outlining the challenges – and opportunities – posed by energy security, climate change, and environmental security.  Balancing these three related issues with the need for economic growth is “the greatest challenge of our generation,” he noted, and encouraged young Indonesians to meet these challenges in cooperation with the United States and the world.  The Ambassador commented, “Only by working together and rising to this challenge can we make the world safe, clean, and prosperous for future generations.”

Finally, Ambassador Blake visited the Balai Laboratorium Kesehatan (BLK) Bandung, one of three laboratories which serve as Indonesia’s Tuberculosis National Reference Laboratory system.  The Director of BLK Bandung demonstrated the GeneXpert tuberculosis diagnostic technology, introduced to Indonesia with support from USAID.  BLK Bandung is an internationally accredited laboratory that provides a critical role in ensuring quality TB diagnostic services are provided across Indonesia, and is another example of how U.S.-Indonesian partnerships in the field of science and technology improve the lives of Indonesians. 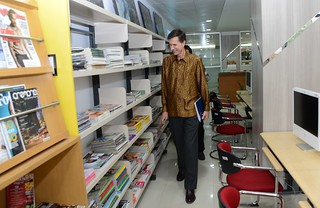