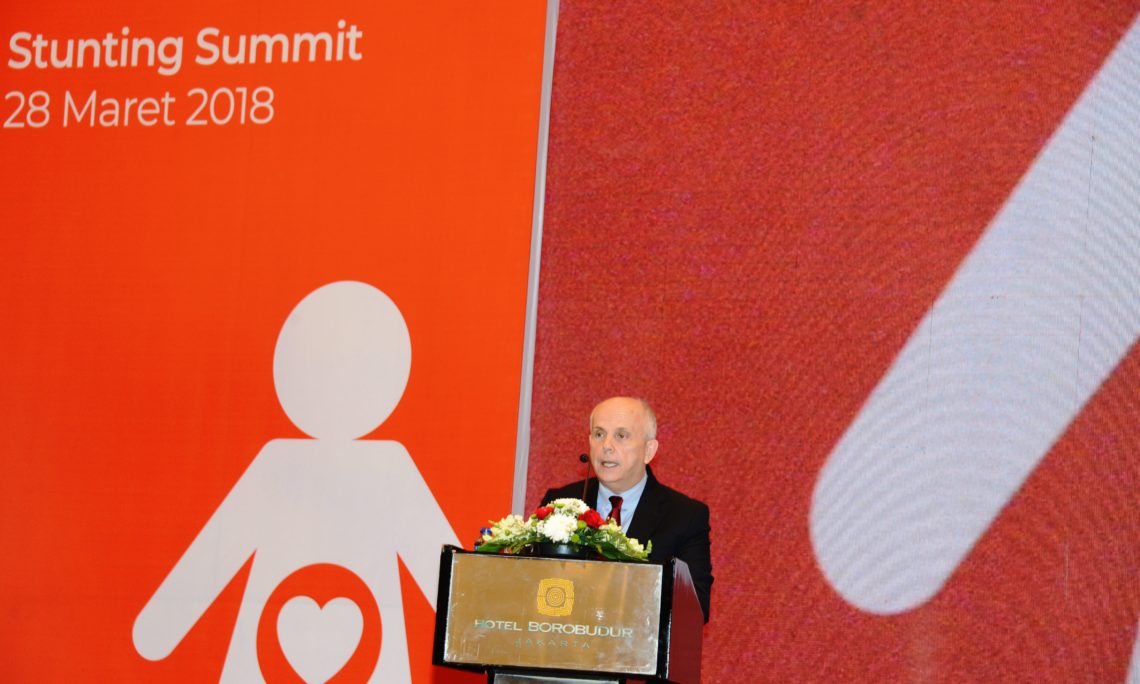 Thank you to our partners from the Ministry of National Development Planning:

Thank you also to the:

I am delighted to have this opportunity to congratulate the Government of Indonesia on its promotion of the fight against stunting to be a national priority and to celebrate the work we are doing together to improve health and nutrition in Indonesia.

We believe that the United States and Indonesia share an abiding interest and a responsibility to address strategic challenges, including increasing economic opportunities and strengthening health services, together as partners. This is why over the last five years, we have been working to make malnutrition a thing of the past. The United States is proud of the partnership that we have had with the Government of Indonesia in the fight against stunting. With this Stunting Summit, we are marking the formal end of this successful partnership, which began in 2011.

When we first began this engagement, the United States, through the Millennium Challenge Corporation Compact with Indonesia, partnered with the government of Indonesia and committed more than 5.5 trillion Rupiah over five years to promote economic growth and lift people out of poverty.

As we considered where we could make the biggest difference, we found that malnutrition represented a significant drain on the country’s economic development. When nearly 8 million children suffer from stunted growth, we face a humanitarian problem—and an economic problem.

That is why the MCC Compact committed more than $130 million to improve nutrition and health in Indonesia—making the U.S. government’s largest single investment in nutrition anywhere in the world at that time. This investment is an excellent example of the strength and the depth of the strategic partnership between our two nations.

The Community-based Nutrition Project has made some important advances. As the project ends, we have trained over 16,000 service providers on proper feeding for pregnant mothers and infants, distributed over 35 million iron tablets for pregnant women and conducted over 3,500 sanitation triggering events in the 64 districts where the activities have taken place.

And, most importantly, thanks to the leadership of many of you gathered there today, Indonesia has helped put nutrition at the forefront of the global development agenda.

Today, we are formally handing this project to the Government of Indonesia. But we know that many of you in this room are already working hard to eradicate stunting. In 2016 alone, over 25 district governments had already replicated training you received through the Nutrition Project using your own funds.

All of us recognize that the cost of inaction is much greater than the cost of taking the right action. For the United States, supporting the Scaling Up Nutrition movement and focusing on the first 1,000 days of a child’s life is the right investment in the future.

The Community-based Nutrition Project has been implemented by Indonesians, for Indonesians. I am confident that you, our partners, will sustain and build on the investments we have made together over the last five years.