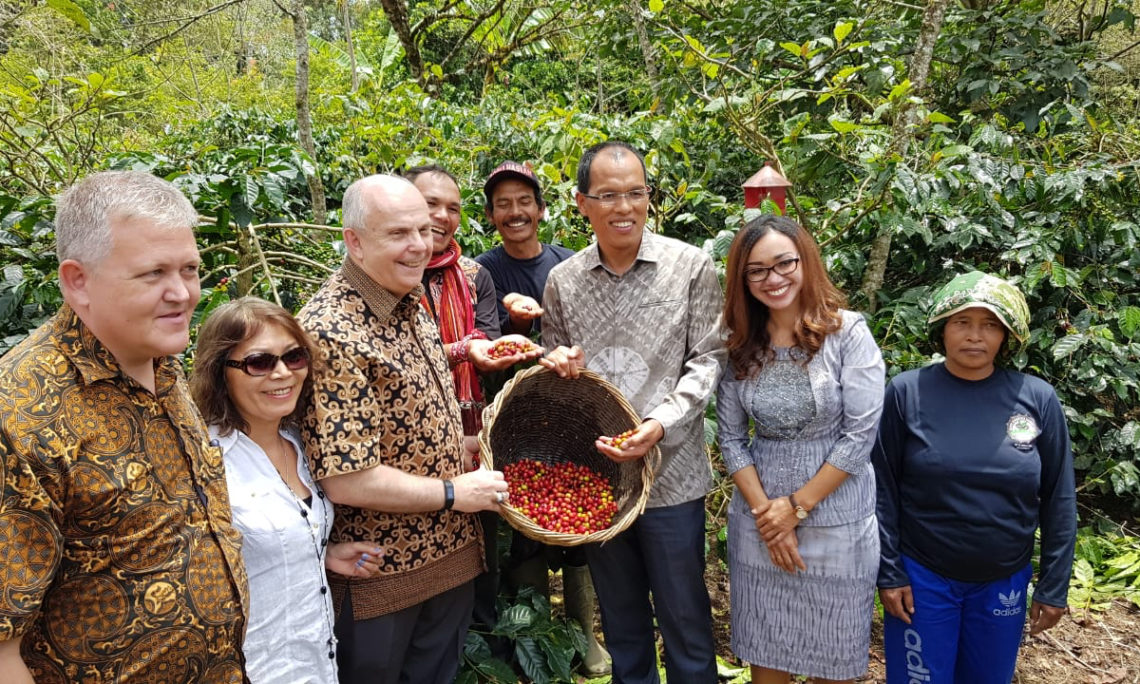 BALIGE – United States Ambassador to Indonesia, Joseph R. Donovan Jr., and U.S. Consul in Medan, Juha Salin, emphasized the importance of the U.S.-Indonesia Strategic Partnership for expanding people-to-people ties between Toba districts and the United States during a trip to the Lake Toba area on September 7 to 9.  Ambassador Donovan spoke at the Del Institute of Technology graduation ceremony in Balige and learned about tourism development in the Lake Toba area.

Education is a top priority under the U.S.-Indonesia Strategic Partnership as connecting Indonesians and Americans builds common bonds and deepens our bilateral ties.  In his remarks to Del High School students, the Ambassador encouraged the students to pursue higher education opportunities in the United States, highlighting free advising and information services available through the Mission’s EducationUSAadvisors and education fairs.  The Ambassador also met with teachers from Del High School who participated in a NASA research program in the United States.

When addressing the 273 graduates of Del Institute of Technology (IT DEL) on Saturday (9/8), Ambassador Donovan stressed the importance of science and innovation.  “American companies, American universities and the U.S. government have all been good partners of Indonesia for a long time.  As diverse democracies, our two nations have substantial shared interests and values, something reflected in our Strategic Partnership and the many kinds of mutual cooperation that support it,” Ambassador Donovan noted.  He ensured the students that they will benefit from “win-win” U.S.-Indonesia cooperation and noted the immense opportunity that lies ahead from working together to solve global problems.

Meeting with eco-tourism providers, the Ambassador learned about the prospects and challenges of developing sustainable tourism in the region. Named as one of Indonesia’s sites to become a new major tourist destination, several infrastructure development projects have taken place in the area such as the expansion of Silangit International Airport and the toll road from Medan to Tebing Tinggi. The Regent of Humbang Hasundutan district gave the Ambassador a brief tour of the Sipinsur Geopark, a pine forest with a picturesque view of Lake Toba.  Afterwards the Ambassador visited a coffee plantation in Humbang Hasundutan district. Representatives from coffee farmers’ cooperative explained to the Ambassador that they also produce civet coffee that they sell through Amazon. Gani Silaban, the head of the cooperative and an alumnus of the iLeap leadership program based in Seattle mentioned that they practice organic and sustainable farming techniques. The cooperative will also host 10 Princeton University students and teachers for a 10-day exchange program.

During a dinner reception hosted by Maritime Affairs Coordinating Minister Luhut Binsar Pandjaitan, the Ambassador met with the head of Lake Toba Authority Board Arie Prasetyo, several district heads and speakers from regional legislative councils. He emphasized that during his trip to the Toba area he is exploring ways to increase commercial ties and educational exchanges between our two countries.

The Ambassador also greeted the people of Balige through a live talk show at Karisma Radio, talking about his trip to the Toba area and highlighting existing U.S.-Indonesia cooperation in North Sumatra.