U.S. Ambassador Robert O. Blake, Jr. swore in the latest class of Peace Corps volunteers at University of Muhammadiyah Malang on June 2.  The 63 new volunteers will bring the total in Indonesia to 109, up from the 88 volunteers who opened the program in 2010.  Ambassador Blake noted that “with the support of national, provincial and local officials over the past four years, Peace Corps has grown its people-to-people partnership program in Indonesia and now operates in both East and West Java. The bonds between Peace Corps Volunteers and their Indonesian host communities benefit both nations equally through increased understanding and mutual respect which is important in developing our relationship as nations.” 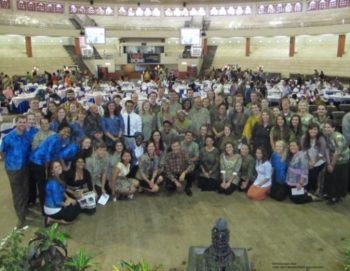 Since their arrival in March, the volunteers have focused on learning the national language of Bahasa Indonesia and experiencing Indonesian culture through living with host families in villages around Malang and Batu. Peace Corps partnered with the University of Muhammadiyah Malang and Wisma Bahasa, a language institute based in Yogyakarta, in order to draw upon local training resources and expertise.  US Consul General for Surabaya, Joaquin F. Monserrate, UMM Rector Dr. Muhadjir Effendy, MAP, Country Director Peace Corps Indonesia Sheila Crowley, and representatives from the Indonesian Political, Legal and Security Affairs Ministry, and the Foreign Ministry attended the event.