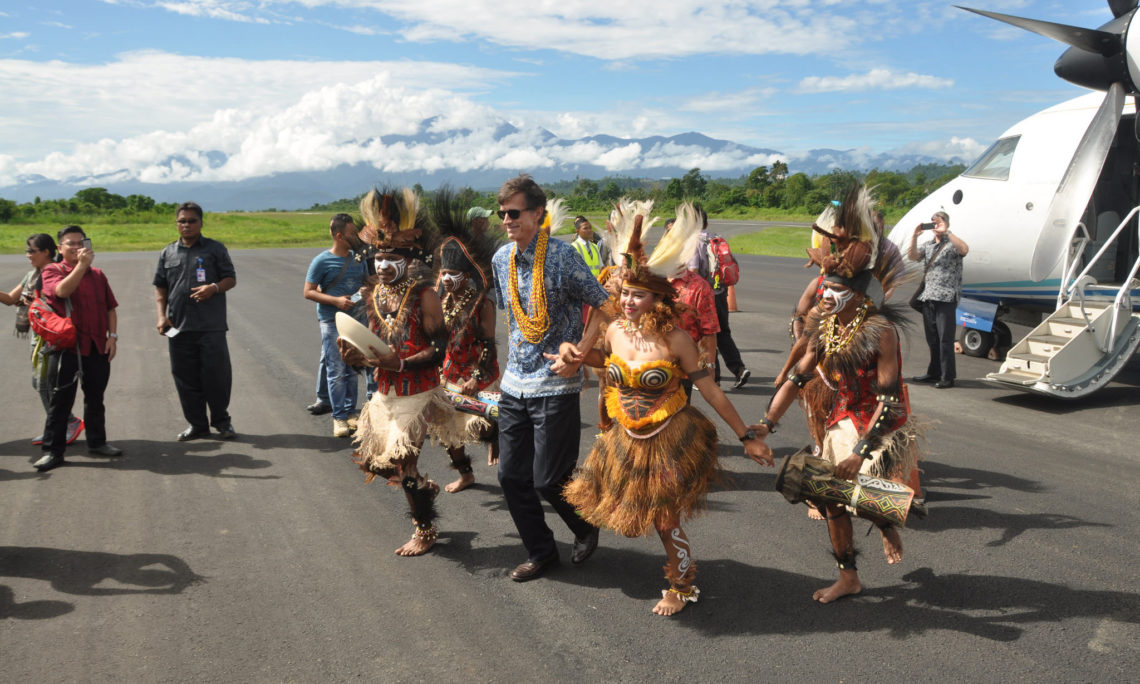 U.S. Ambassador Robert O. Blake visited Papua and the North Maluku during the week of January 18th making stops in Ternate, Manokwari, Nabire and Jayapura.  The primary purpose of the trip was to visit USAID programs aimed at reducing poverty and protecting the environment in the region through the promotion of sustainable farming methods, the preservation of the region’s rich forests and wildlife, and to monitor ongoing efforts to help increase the quality and availability of primary education.  The Ambassador also met with regional officials and leaders from civil society and religious communities.

On the first leg of his trip Ambassador Blake visited with local officials on the island of Ternate where he toured the city’s port and visited a local tuna processing plant.  During his interaction with local fishermen the Ambassador encouraged the group to adopt and implement sustainable fishing methods, and to contribute to Indonesia’s effort to crack down on illegal, unregulated and unreported (IUU) fishing in the area. The Ambassador also announced an upcoming USAID project that will support the Province in promoting more sustainable fisheries while generating more jobs and income for local fishermen and communities and conserving Indonesia’s precious marine protected areas.

The delegation continued on to Manokwari, the capital of West Papua, where they met with local civil society leaders who provided Ambassador Blake with an overview of the issues that they are grappling with in the region.  The Ambassador also had the opportunity to visit the Arfak nature reserve, and was able to spot a number of the region’s famed birds of paradise in their natural habitat.  On the last day in the region the Ambassador was welcomed by Governor Abraham Atururi and his staff for an open and frank conversation about continuing challenges that the government is facing including how the Province will implement its “Conservation Province” declaration.

From Manokwari the delegation proceed to the Cenderawasih Bay Marine Nature Reserve, where the Ambassador was able to observe the partnership between the World Wildlife Fund and park authorities to protect local maritime habitats and promote sustainable fishing practices among local communities.

From there Ambassador Blake travelled to Sentani, where he toured a number of villages that are working on sustainably farming cassava, vanilla, pepper and cloves to increase production and incomes of the local farmers.  The program is a public private partnership between the National Cooperative Business Association (NCBA), a U.S.-based farming cooperative, and USAID.  NCBA, through its affiliated local NGO the Indonesia Cooperative Business Development Alliance (ICBDA), helps boost income levels for poor and vulnerable farmers by assisting them to grow higher quality and higher yielding crops, such as cassava, vanilla and black pepper. The farmers also receive help in marketing their products to Indonesian and international buyers, and in integrating their crops with local forests which helps prevent the clearcutting of sensitive habitats.

Following the visit to local farms Ambassador Blake had the opportunity to visit the village of Ormu Kecil, a native Papuan habitation located on the edges of the Cyclops Nature Reserve, one of four Papuan landscapes USAID has partnered with local authorities to manage and protect as part of the $47 million effort to help conserve and management of Indonesia’s forests in Papua, Kalimantan and Aceh.  In Papua, USAID LESTARI will work in the Cyclops Nature Reserve, the Lorentz Lowlands, Sarmi, and Mappi-Bouven Digoel.  While this USAID project helps local communities conserve natural forests and biodiversity for years and years to come, it also helps contribute to the global effort to preserve Indonesia’s unique biodiversity and slow the nation’s contribution to climate change.

To close out the visit the Ambassador also met individually with Provincial Governor Lukas Enembe, Chief of Police Inspector General Paulus Waterpauw, and local religious leaders.  During these visits he stressed that USAID projects in the region are geared toward supporting President Jokowi’s efforts to fulfil his government’s climate change goals and poverty reduction efforts, as well as those of Papua province, and thanked the Governor and Kapolda for their ongoing efforts to protect U.S. citizens residing in Papua.  During the meeting with the Kapolda the Ambassador also praised police efforts in engaging with local communities, and urged them to better adopt non-lethal methods of crowd control and to embrace greater accountability and transparency when officers are involved in incidents.

On his final stop of the trip the Ambassador took the opportunity to visit a local school near the airport in Sentani that is working with USAID through its KINERJA program to increase accountability and performance in targeted schools throughout the region. This USAID project supports collaboration between schools, local and provincial government, and citizens to promote good governance that uphold performance standards and improve school governance and transparency.