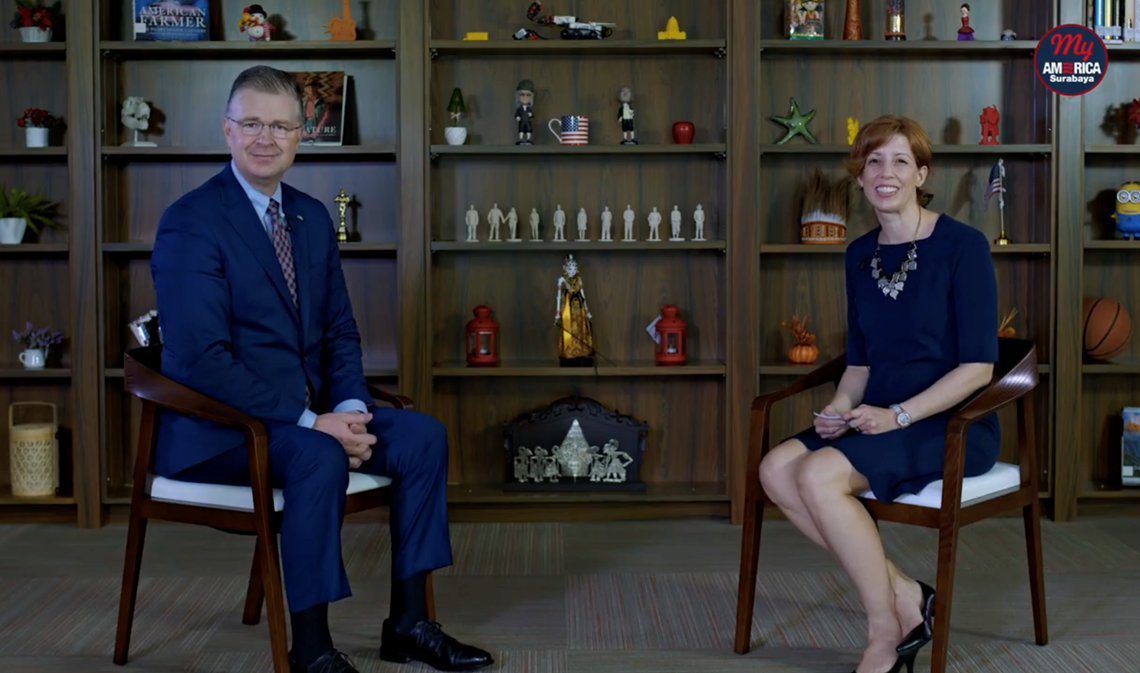 SURABAYA – U.S. Assistant Secretary of State for East Asian and Pacific Affairs Daniel J. Kritenbrink is the guest in the tenth episode of the “CurioUS” video podcast which can be watched on the U.S. Consulate General in Surabaya’s YouTube channel (bit.ly/CurioUS_Episode10). The episode premiered on January 15, 2022 at 2:00 PM.

CurioUS is a video podcast series from the U.S. Consulate General in Surabaya that engages in honest and open conversations about U.S. diplomats’ lives and experiences. Audience may also watch previous episodes of CurioUS at bit.ly/CurioUS_YouTubePlaylist.

“I was very intentional about choosing Jakarta as my first stop in Southeast Asia given Indonesia’s obvious leadership role in the region,” U.S. Assistant Secretary Dan Kritenbrink said. He continued, “Indonesia is our strategic partner. We have a whole range of interests we are advancing together.”

Assistant Secretary Kritenbrink highlighted specific areas of cooperation between the United States and Indonesia, including climate change, our security partnership, and the U.S. donation of more than 25 million doses of COVID-19 vaccines to Indonesia. “We are all about advancing our shared interests in peace, prosperity, and advancing our shared values,” said Assistant Secretary Kritenbrink.

In addition to discussing the U.S.–Indonesia diplomatic partnership, this episode also shows a personal Assistant Secretary Kritenbrink. “During this episode, you will learn why Assistant Secretary Kritenbrink wanted to become a diplomat. He talks about college football, musical theater, and how he came to record a viral rap video,” said Angie Mizeur, Public Affairs Officer of the U.S. Consulate General in Surabaya. “CurioUS viewers will also be surprised about his favorite karaoke songs. Viewers can obtain prizes if they ask the best questions in the comments section,” she continued.

Daniel J. Kritenbrink became Assistant Secretary of State for East Asian and Pacific Affairs on September 24, 2021. A career member of the Senior Foreign Service, class of Career Minister, Kritenbrink has been an American diplomat since 1994.

Assistant Secretary Kritenbrink previously served as U.S. Ambassador to Vietnam (2017-2021), Senior Director for Asian Affairs at the National Security Council (2015-2017), and Deputy Chief of Mission at the U.S. Embassy in Beijing (2013-2015). He has also served in Beijing, Tokyo, Sapporo, and Kuwait City. His other Washington assignments have included Director of the Office of Chinese and Mongolian Affairs at the Department of State and Staff Assistant to the Assistant Secretary of State for Near Eastern Affairs.

For more information about CurioUS, contact the Public Affairs Section U.S. Consulate General in Surabaya via phone at +62 (31) 2975300 or via email at passurabaya@state.gov.