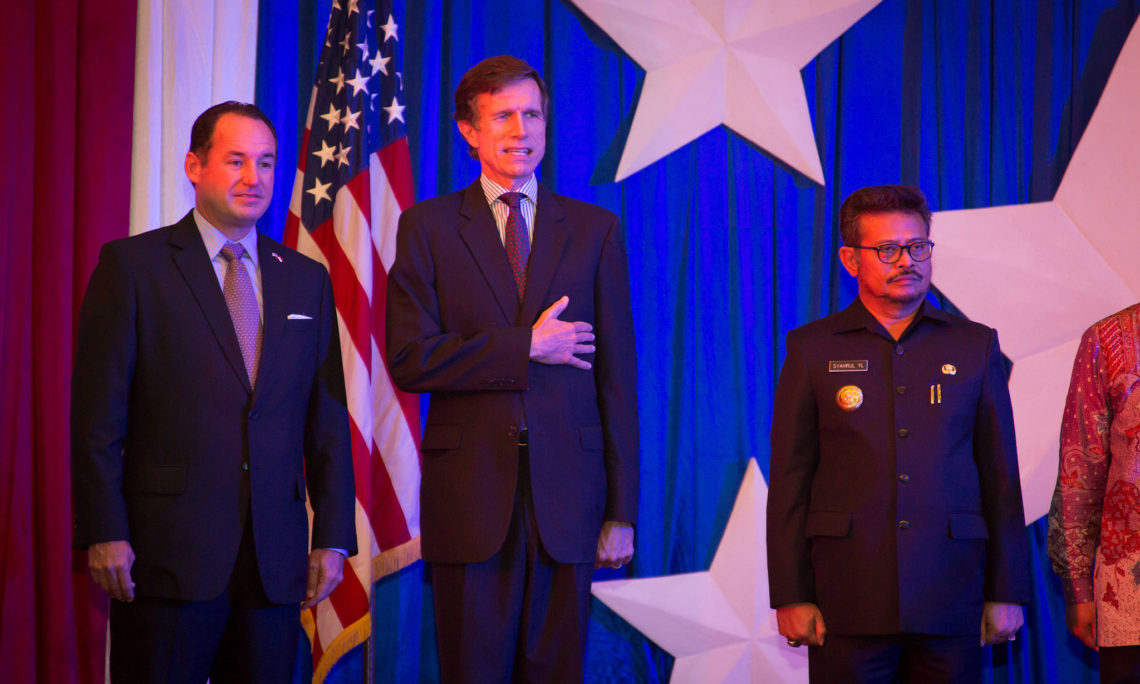 Ambassador Robert O. Blake, the U.S. Ambassador to Indonesia, and U.S. Consul General Joaquin F. Monserrate hosted U.S. Consulate General Surabaya’s Independence Day celebration in Makassar on May 28, 2015. Over 100 guests were invited, including the Mayor of Makassar and the Governor of South Sulawesi.

Ambassador Blake delivered opening remarks and highlighted the important links between the U.S. and Makassar. The theme for this year’s event was “Building Bridges” to highlight the growing connection between South Sulawesi and the U.S. in innovation, education, business, environment and culture.

“We are celebrating our Independence Day in Makassar because we want to share our most important holiday with friends, old and new, in this important part of Indonesia,” said Ambassador Blake. “Both of our countries share a love of democracy—both Indonesia and the United States remain united by our shared democratic values and our commitment to work as partners to promote prosperity in Asia.”

“Since the Consulate was established in the 19 century, we have always strived to reach out beyond our base in Surabaya to serve and engage with the people from eastern Indonesia, to build bridges,” said U.S. Consul General Joaquin Monserrate. “We are honored to share our Independence Day celebrations with the people of South Sulawesi from all strains of society: academic, religious, civil society, government, business and others.”

For the celebrations, representatives from the U.S. Consulate and guests from South Sulawesi attended the festivities. The U.S. Consulate arrived to Makassar on May 25 to kick off the festivities and engage with the people of Makassar that exemplifies the partnership that exists between Makassar and the United States. They held several events to highlight Makassar’s youth, entrepreneurship and environment.