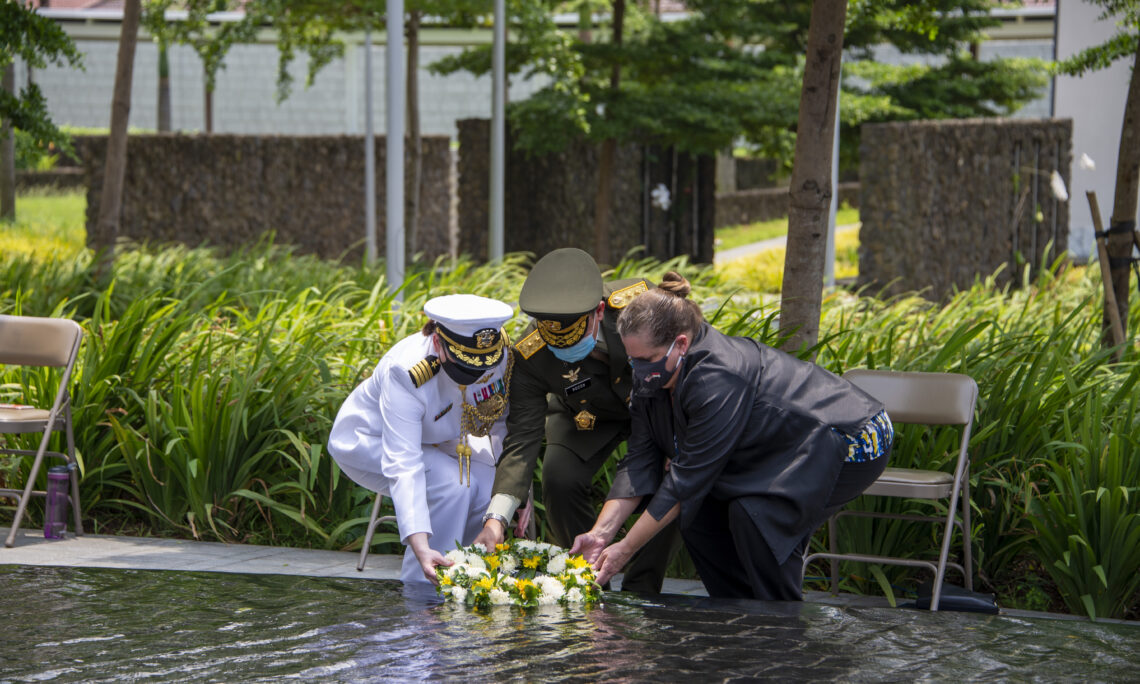 Jakarta – On March 1, 2021, the U.S. Embassy was honored to host distinguished guests from the Indonesian, Australian, and U.S. Navies, Armed Forces, and Governments for a day of remembrance of shared history in commemoration of the Battle of Sunda Strait.  After playing the national anthems of Indonesia, Australia, and the United States, remarks were given by the U.S. Naval Attaché, the Australian Naval Attaché, a representative from the Indonesian Ministry of Defense, and the Chargé d’Affaires, a.i. of the U.S. Mission to Indonesia.  The ceremony, held on the grounds of the U.S. Embassy, concluded with all representatives laying their respective wreaths in the water, a time-honored naval tradition.

This annual event commemorates the sinking of the HMAS Perth I and USS Houston (CA-30) on March 1, 1942. 696 American men and 353 Australian sailors and marines were lost in the waters of Banten Bay just after midnight on March 1st, 1942 — many of them fighting until the very end.  The 368 Houston Sailors that survived the sinking of their ship continued to resist while in captivity in Java, Singapore, Burma, Thailand, and Japan – until the end of the World War II, when 291 Houston sailors returned home as heroes.  Through this commemoration, the U.S. Embassy remembers the ships and their brave crews and looks to the future as we work with Indonesian friends to convert the site of the USS Houston Banten Bay into a maritime conservation area.

Chargé d’Affaires, a.i. of the U.S. Embassy Heather Variava expressed gratitude to Indonesian National Government and Banten Government officials for their commitment to protecting the sites as a marine conservation area.  “We are especially grateful for your continued support and cooperation in designating the site of the USS Houston a Maritime Conservation Zone, and are committed to working with you towards that goal,” Variava said.

Please open the following link for videos and photos.