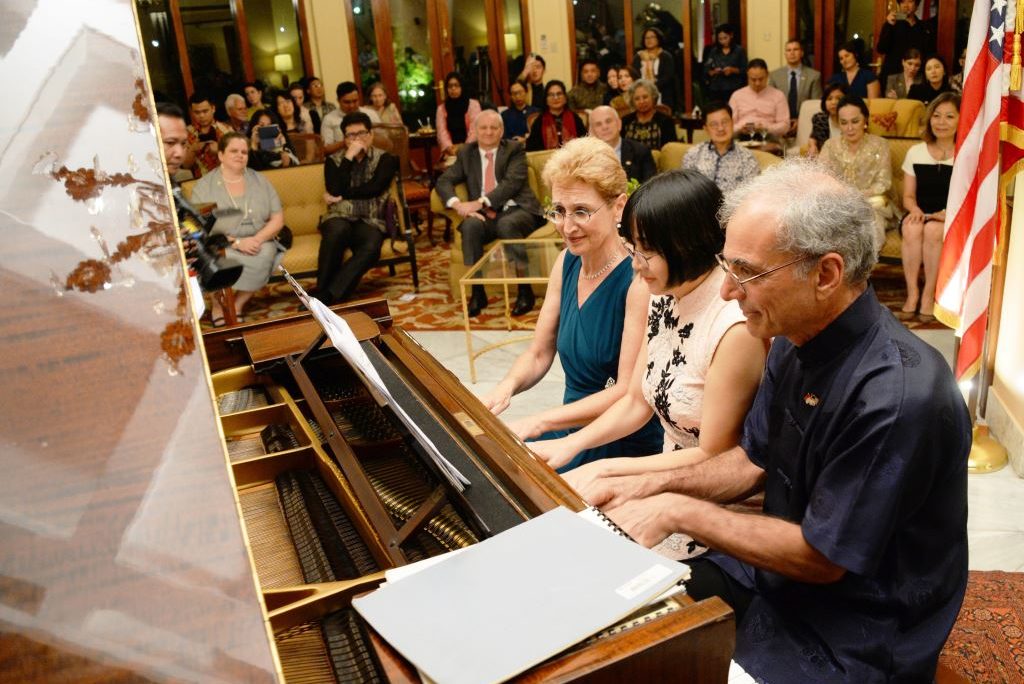 United States Ambassador to Indonesia Joseph R. Donovan Jr. hosted a piano concert in collaboration with the Bandung Philharmonic at his residence to launch the Embassy’s year-long program to commemorate the 70th anniversary of U.S.-Indonesia diplomatic ties. This inaugural event, featuring visiting classical pianists Sally Pinkas and Evan Hirsch, showcased musical and cultural connections between the United States and Indonesia.

“This year, 2019, marks the 70th anniversary of diplomatic ties between the U.S. and Indonesia,’ said Ambassador Donovan. “Throughout the year, we will be highlighting the places, stories, and dreams that showcase America’s broad partnership with Indonesia.” He emphasized that the purpose of events like this concert was to celebrate “the people of our two countries, as Indonesians and Americans come together to celebrate our diversity and our partnership.”

The Ambassador noted that the Bandung Philharmonic is a concrete example of the strength of the people-to-people ties between the United States and Indonesia. Its creation is the result of a collaboration between Airin Efferin of Bandung and her professor in Chicago to bring together some of the best musicians both countries have to offer. “Three successful seasons later, the Philharmonic continues to show us how people and institutions collaborate together to produce long lasting ties – and beautiful music – for both our nations,” he said.

Ms. Efferin expressed her appreciation for the invitation to celebrate the 70th Anniversary and feature the way music can tie two cultures together. “The Bandung Philharmonic, from the beginning, was truly bilateral from its conception, so being a part of the anniversary celebrations is quite an honor,” she said, adding, “A love of music and respect for what we do is, in the end, what helps us [musicians] appreciate our cultural differences.”

For more information about the 70th Anniversary of U.S.-Indonesia diplomatic ties, email jakartapressoffice@state.gov and follow along on social media using the hashtag #IndonesiaUSA70th.