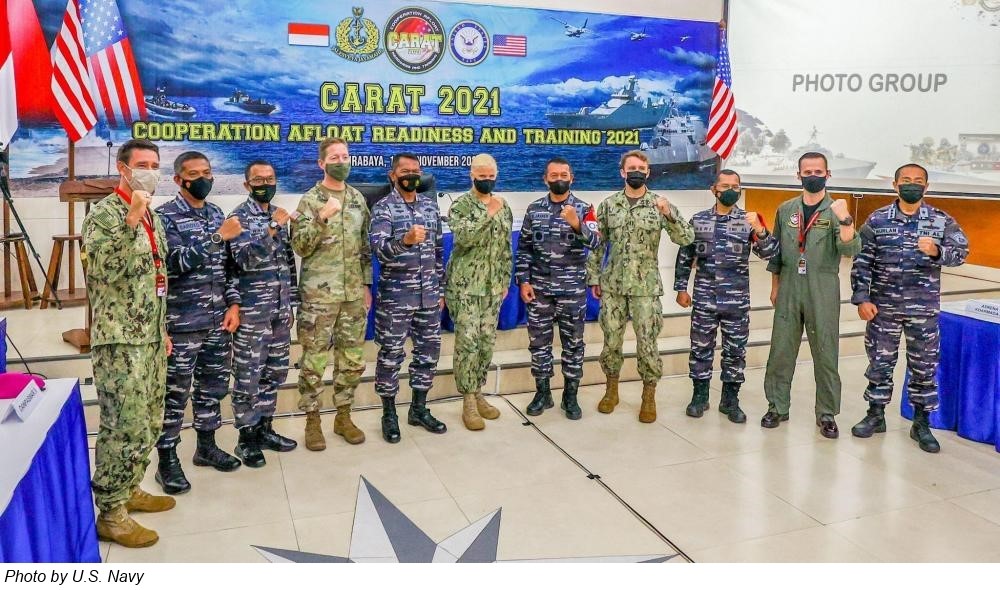 SURABAYA, Indonesia – Military personnel from the United States and Indonesia kicked off Cooperation Afloat Readiness and Training (CARAT) Indonesia on November 1 in Surabaya.   The 11-day engagement focuses on the full spectrum of naval capabilities and features cooperative evolutions that highlight the ability of U.S. and Indonesia to work together towards the common goal of ensuring a free and open Indo-Pacific maritime security environment.

“Strong relationships are built on trust, and developed through demonstrated actions and consistent and thoughtful discourse.  These strong relationships are the foundation on which security, stability, and prosperity flourish,” said Capt. Tom Ogden, commodore of Destroyer Squadron (DESRON) 7.  “CARAT Indonesia is a perfect venue for the U.S. and Indonesia to address mutual maritime security concerns, and to expand our cooperation in Southeast Asia.”

The exercise will feature complex at-sea training to demonstrate the bilateral force’s ability to work together through numerous events including divisional tactics designed to enhance communication as ships sail together in complex maneuvers. It will also consist of a tracking exercise aimed at increasing both navies’ ability to track and pursue targets through the coordinated deployment of surface ships and maritime patrol aircraft. Other focus areas include surface warfare, visit, board, search and seizure drills, mobile dive and salvage training, a gunnery exercise, maritime patrol operations, and exchanges between Explosive Ordnance Disposal technicians.

“CARAT 2021 is a forum for military-to-military cooperation between Indonesia and United States, especially the Indonesian navy and United States seventh fleet bilateral program,” said TNI-AL First Adm. Rachmad Jayadi, Second Fleet Command Chief Of Staff, during the opening ceremony. “This joint exercise aims to improve the capabilities of the navy personnel in the field of warfare capability and become a place for sharing our knowledge and enhancing the skills of naval warfare as well as interoperability in facing maritime security challenges in the two countries.”

This year, CARAT Indonesia has resumed with safety mitigation measures after being cancelled in 2020 for the COVID-19 pandemic. Indonesia has been part of the CARAT exercise series since it began in 1995. After 27 years of annual training events between the armed forces, CARAT Indonesia remains a model for cooperation that has evolved in complexity and enables both navies to refine operations and tactics in response to both traditional and non-traditional maritime security challenges.