Chargé d’Affaires Kristen Bauer opened a discussion on the crisis in the Ukraine which outlined the context for the current crisis and the international community’s response. Representatives from the Ukrainian Embassy in Jakarta, as well as the EU Delegation, the Polish Embassy and Indonesia Defense University joined the U.S. Embassy to share information on the current situation in Ukraine, the actions that the United States and other nations are taking to support the Ukrainian government, and the importance of defending international obligations to respect Ukraine’s sovereignty and territorial integrity. The panel of speakers, moderated by a representative of The Habibie Center, fielded questions from interested Indonesians, including university students. The representatives underlined the international community’s call for Russia to use peaceful international mechanisms and engage in dialogue to deescalate the situation in Ukraine while addressing Russia’s concerns. Panelists pointed out that United States and other countries have sought to deploy international observers immediately to monitor any safety concerns and the possible flow of refugees. Regrettably, several OSCE observer missions and a UN special envoy have been so far denied entry into Crimea. All of the panelists expressed concern that tensions remain high and the future uncertain because Russia has not yet agreed to participate in discussions with the Ukrainian government and use peaceful mechanisms to address concerns. The panelists also underscored the illegitimacy of Crimea’s planned referendum on March 16. 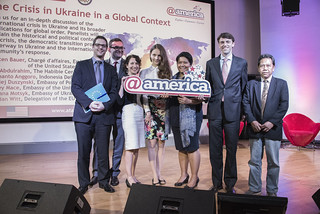