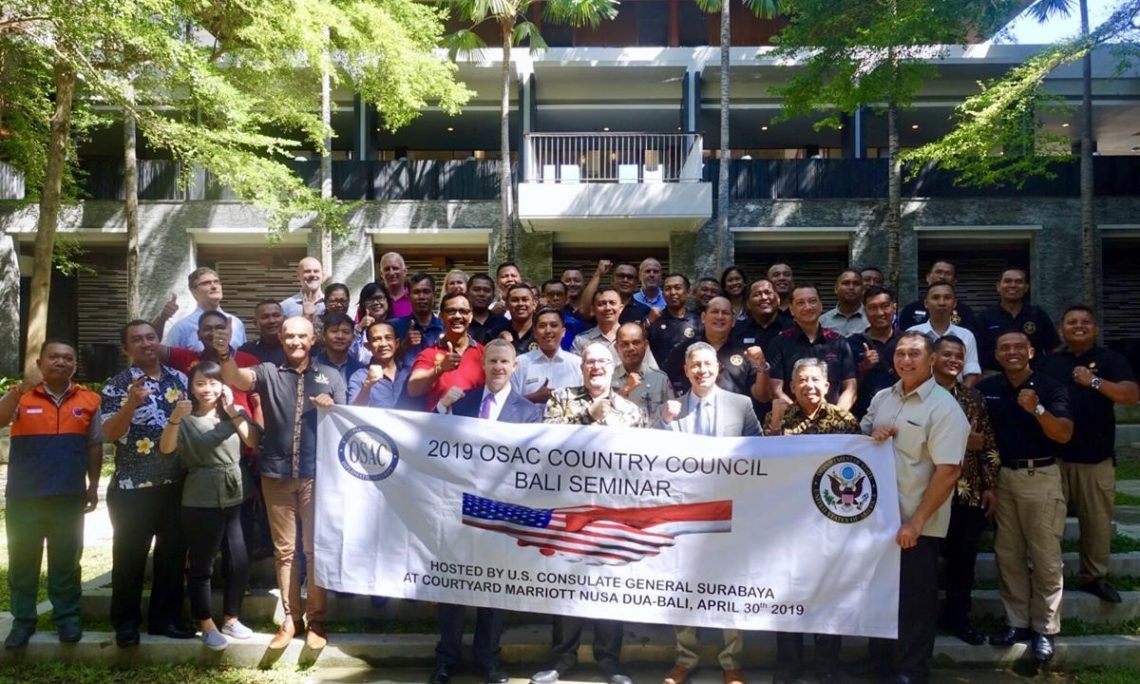 On April 29-30, 2019, the United States Consulate General Surabaya inaugurated the Overseas Security Advisory Council (OSAC) Bali chapter.  Consul General Mark McGovern and U.S. Mission to Indonesia Acting Deputy Chief of Mission Brendan Murray opened the event, which was attended by over 60 General Managers and Security Directors from OSAC member hotels, as well as representatives from the diplomatic community, POLDA Bali and BPBD Bali.  In addition to the opening session, the U.S. Mission to Indonesia, in partnership with Indonesian Red Cross (PMI), provided extensive training for first responders and security staff from the Bali Hotels Association. Both events were held at the Courtyard Marriott Bali Nusa Dua Resort.

Consul General Mark McGovern said, “The Overseas Security Advisory Council is the link for security information sharing between business and the U.S. Government. This alliance strengthens a vital part of the Indonesian economy, and increase security and confidence for the millions of tourists who visit Bali yearly. This is another example of the enduring partnership between the United States and Indonesia, and shows our commitment to stability and security in the region.”

The Overseas Security Advisory Council (OSAC) was established in 1985 to promote security cooperation between the United States government and American private-sector interests operating overseas.  Nearly 17,000 representatives from over 4,900 U.S. organizations participate in OSAC programs, including business, religious groups, universities and colleges and other non-governmental organizations.

During the OSAC launch, the U.S. Mission to Indonesia, in partnership with the Indonesian Red Cross Society led a two-day workshop for Medical First Responders. This hands-on training provided first aid, CPR, and disaster response preparation, and was attended by security staff and medical personnel affiliated with the Bali Hotels Association.

Partnerships with OSAC and the Bali Hotels Association celebrate the many ways that the Indonesian-U.S. relationship is strong. For more information about this program, or other U.S. Consulate programs, please contact PASsurabaya@state.gov.