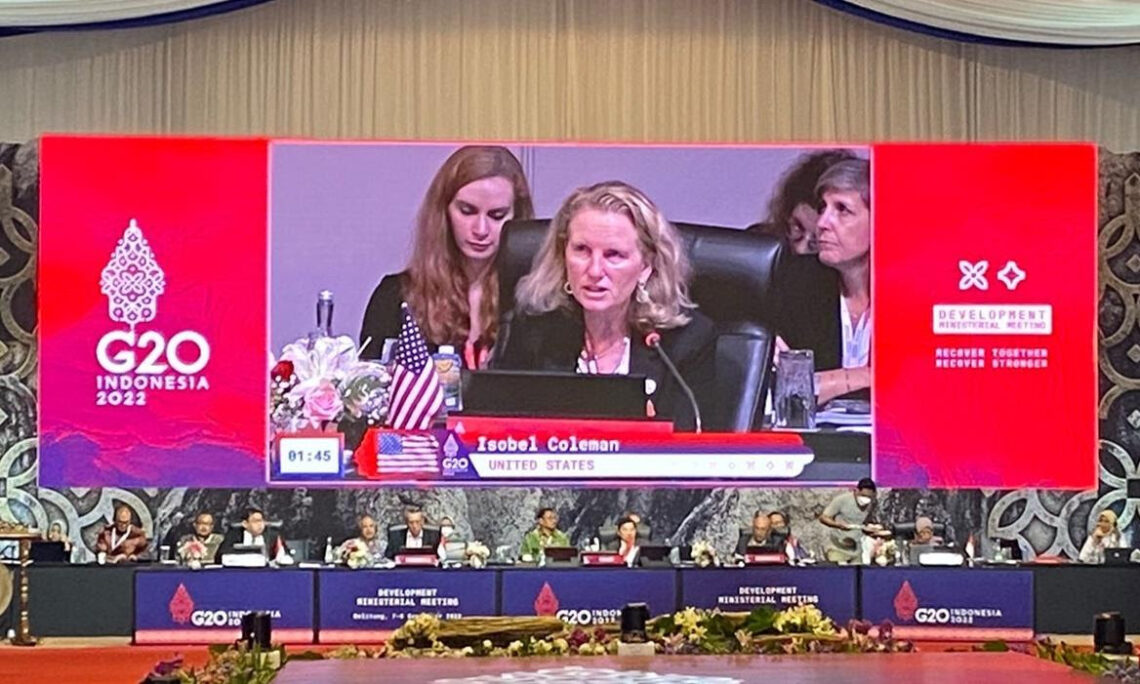 On September 9-10, USAID Deputy Administrator Isobel Coleman visited Jakarta, Indonesia to underscore the United States’ enduring partnership with the government and people of Indonesia. She met with the USAID Mission staff to celebrate USAID’s long track record of shared successes with Indonesia in promoting education; health; governance; gender equality and equity; economic growth; and environmental protection. The Deputy Administrator also met with USAID Indonesia’s locally-employed staff and thanked them for their dedicated support for the Indonesian people. The Deputy Administrator acknowledged the difficulties Indonesia continues to face with the COVID-19 pandemic and commended the staff for helping to get shots in arms and bring the country closer to full economic recovery.

During her visit, the Deputy Administrator also met the Deputy Secretary General of the Association of Southeast Asian Nations (ASEAN) to reinforce the United States’ commitment to expanding our engagement with ASEAN, including in the area of renewable energy, and underscore the importance of ASEAN centrality in the region. The Deputy Administrator highlighted how USAID directly supports key elements of the U.S Indo-Pacific Strategy, which aims to advance a more prosperous, connected, and resilient region, with ASEAN being a critical partner in achieving this goal. In particular, the Deputy Administrator emphasized how USAID’s work with ASEAN is strengthening the U.S.-ASEAN partnership on trade, digital development, and energy. Deputy Administrator Coleman met with Secretary General of the Ministry of Foreign Affairs Cecep Herawan to discuss the U.S.-Indonesia development partnership and mutual commitments in support of a free and open Indo-Pacific region. She also met with local journalists and human rights activists to hear firsthand about the current issues affecting democracy in Indonesia. She highlighted USAID’s support for Indonesian civil society and the important role that the media and rights defenders play in defending against authoritarianism, advancing respect for human rights, and fighting corruption.

On September 10, the Deputy Administrator enjoyed a local coffee tasting with several Indonesian women leaders in agriculture and environmental sustainability. She then participated in an exclusive media interview with a local broadcast journalist to discuss USAID support for inclusive development across Indonesia and her participation in the G20 Development Ministerial in Belitung.

The Deputy Administrator met with private sector representatives from the logistics, travel, agriculture, environment, and transportation sectors to discuss digitalization in Indonesia and how USAID partners with Indonesia’s private sector to support and catalyze the country’s development. She discussed the private sector’s role in digitization in Indonesia and how inclusive economic growth underpinned by an ever-expanding digital economy has the potential to bring the benefits of development progress to more communities than ever before.

Deputy Administrator Coleman then met with Coordinating Minister for Maritime and Investment Affairs Luhut Binsar Pandjaitan to express continued U.S. support for the government and people of Indonesia to tackle the climate crisis and other pressing challenges facing the country. Deputy Administrator Coleman commended Indonesia’s leadership and achievements of its G20 presidency, particularly its priority to galvanize collective action to address strengthen food and energy security, combat the COVID-19 pandemic, tackle the climate crisis, and address global economic volatility. The Deputy Administrator concluded her visit by meeting with USAID Foreign Service Officers to underscore USAID’s programmatic priorities and learn about their work and experiences serving in Indonesia.