Home Laman utama | News & Events | Women of Change in Indonesia: Five Women Who Made a Difference 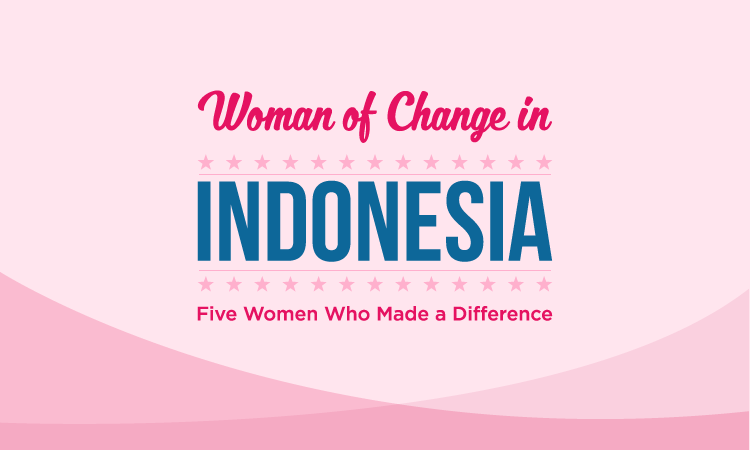 Women of Change in Indonesia: Five Women Who Made a Difference (State Dept.)

In order to further advance the status of woman and girls and emphasize our commitment to global gender equality, which remains a top strategic priority of our foreign policy, the Deputy Chief of Mission is hosting the “Indonesian Women of Change Awards,” honoring Indonesian women leaders who are working to change their communities for the better.

The Indonesian Women of Change Awards mirrors the U.S. Department of State Office of Global Women’s Issues (S/GWI) annual “International Women of Courage Awards”, which honor women from around the world for their courage and leadership in advocating women’s rights and empowerment, often at great personal risk.  To highlight our commitment to promote gender equality in Indonesia, and to celebrate Indonesia’s work on women’s empowerment, we hosted our own Women of Change awards program at @america on Tuesday, March 3, from 6:30 to 8:30 pm.

Ir Rambu Atanau is working for change in preventing and responding to gender-based violence. Rambu is a tireless activist who has developed and strengthened the women’s movement in Nusa Tenggara Timur. She developed shelters for women and children victims of violence, providing a safe environment and working to reintegrate victims into society. She has also worked to develop service networks throughout NTT so that prevention and handling of cases of gender-based violence cases is standardized and all stakeholders are invested in the outcomes. Ir Rambu works across communities, organizations and genders to affect change in her community. She is a 2015 Women of Change.

Lian Gogali is working for change by empowering adolescent girls. In Poso, Gogali built the Women School of Mosintuwu for women of different villages, ethnicities, and religions to come together and discuss issues of tolerance, peace, gender, political and economic rights, healthcare and more. She also launched “Project Sophia,” a mobile library program targeting children affected by conflict in Poso. Project Sophia visits villages to bring together children from different backgrounds to learn, play and express ideas. Lian said in a Tedx Talk, “There is no need for a lot of money to do this, or nice car, or even two legs!  Today if you have a cell phone, a white board, and a big idea, you can make it happen, no matter where you come from…I did!”  She is a 2015 Women of Change.

Veronica Ata Tori is working for change in increasing women’s political participation. In Nusa Tengarra Timur, Ata Tori was an initiator of the Women of NTT Political Network and has actively worked to give political education to women in the community. She has lobbied political parties and executive institutions to accommodate women as political candidates and she was party to the NTT Women in Politics grand design, which is used as a reference by the local government to develop gender responsive policies. She is a teacher at the Democracy School in NTT and founder of the Communication Forum and Women’s Rights Movement of NTT which works to encourage potential women to serve in government. She is a 2015 Women of Change.

Febriarti Khairunnisa is working for change by increasing women’s economic participation and combatting environmental degradation. In Lombok, Febri started the Garbage Bank, “Bank Sampah,” to solve waste problems and empower local women. She works with more than 30 housewives in poor communities to collect, process, and sell inorganic waste.  Febri has recently expanded this program to include students. The new program, which involves more than 50 schools and 10,000 children, allows students to earn money from selling processed waste. The funds earned go into a savings account that is later used for school tuition. She is a 2015 Women of Change.

Col Sri Rumiati of the Indonesian National Police is working for change by preventing and responding to gender based violence and by advocating for greater women’s participation in the Police Force. She has long been a committed and aggressive advocate for women’s equality and empowerment in the INP and was instrumental in the significant increase of women police officers. She campaigned tirelessly to ensure policewomen were represented in every sub-district across Indonesia to better serve communities. She has also been a vocal critic of “virginity testing” for police recruits and has been selected to conduct gender sensitivity training across the INP in light of recent controversy. She has also established teaching modules and curriculum for the Midwifery Academy to use across Indonesia. She is a 2015 Women of Change.