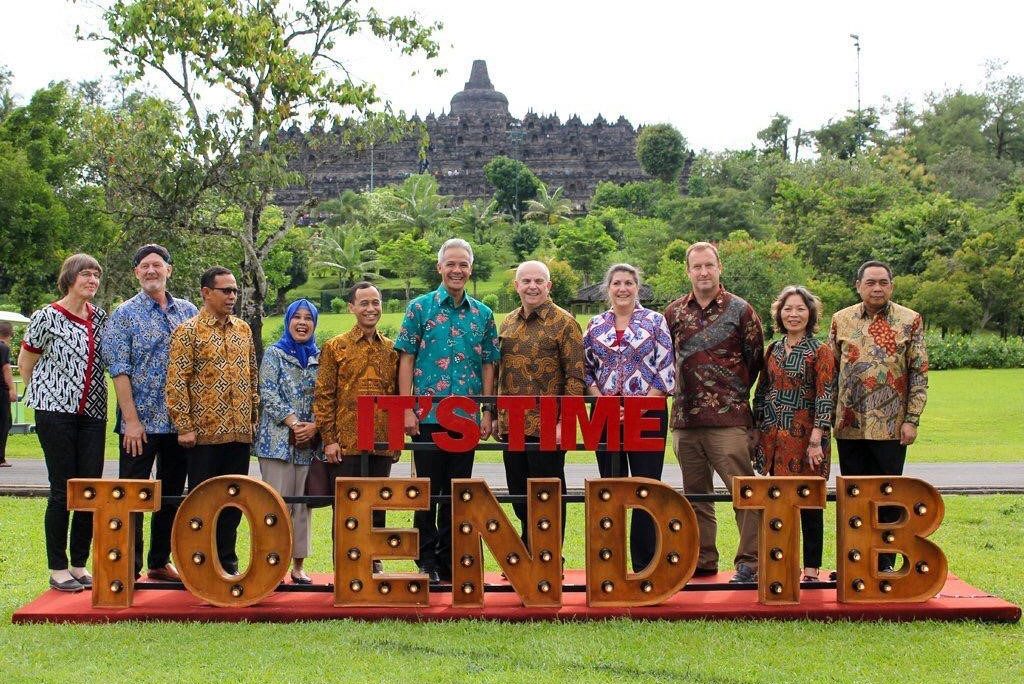 Magelang — At Borobudur Temple, U.S. Ambassador Joseph R. Donovan, Jr., together with Indonesian Ministry of Health Director General of Disease Control and Prevention Dr. Anung Sugihantono and Governor of Central Java Ganjar Pranowo, commemorated World Tuberculosis (TB) Day. This joint event between the U.S. Government and the Government of Indonesia celebrated the 70th anniversary of U.S.-Indonesia diplomatic relations and the opening of educational TB exhibit “A Story of Hope.” Event festivities highlighted the long partnership between the United States and Indonesia in fighting tuberculosis and called for continued collaboration for a TB-Free Indonesia by 2030.

“We hope to eliminate TB in Central Java by 2028,” said Governor Ganjar. “And we cannot do it alone; support from the United States Agency for International Development and from the community (such as the Pemberdayaan Kesejahteraan Keluarga or Family Welfare and Empowerment groups), including young people, need to be involved in speeding up the process [of eliminating TB].”

At the event, the Ministry also launched a national contact investigation campaign. “Contact investigation is designed to find TB and latent TB cases—in other words, patients who do not yet have symptoms,” said Director General Anung. “Aside from this, on World TB Day this year, we will implement active case finding in 34 provinces and 514 regencies/cities with a target of screening 1,000,000 individuals for TB.” This contact investigation will help more at-risk individuals (such as those working closely with TB patients) get screened and referred for treatment should they contract TB. The campaign is another example of the depth and breadth of the U.S-Indonesia partnership in eliminating TB.

“TB remains a leading cause of death for Indonesians. Twenty years ago, the United States and Indonesia joined forces to fight TB, and we are proud that this work has benefited over 700,000 Indonesians suffering from TB. This year, as we celebrate 70 years of diplomatic relations, we look forward to the future: a TB-free Indonesia by 2030 and prosperous, healthy futures for both of our countries,” said Ambassador Donovan. Since TB is treatable, anyone experiencing a consistent cough should see a healthcare provider; treatment is free under Indonesia’s Universal Health Coverage Program.

“In Indonesia, the U.S. Government, through USAID, has been a leader in the fight against TB for two decades. Under our new approach, the Global Accelerator to End TB, we will partner to combine the power of investment, shared commitment and local solutions to further reduce Indonesia’s TB burden,” said USAID Mission Director Erin E. McKee.

“A Story of Hope” will be open to the public March 12-20 at Universitas Gadjah Mada and at Erasmus Huis in Jakarta until April. The exhibit will then be toured in four of the five priority provinces of Challenge TB, USAID’s TB project: West Java, East Java, North Sumatra and Papua. Through Challenge TB, USAID works with Indonesia’s National TB Program to provide technical leadership, advise on strategic choices, and ensure the highest impact with available resources.

About USAID
USAID is the world’s premier international development agency and a catalytic actor driving development results. Our work advances U.S. national security and economic prosperity, demonstrates American generosity, and supports self-reliance and resilience. This year marks the 70th anniversary of relations between the U.S. and Indonesia. The “A Story of Hope” exhibition is one of the events highlighting the depth and breadth of the partnership between our nations and our peoples.

About KNCV and Challenge TB
KNCV is an international non-profit organization that specifically focuses on alleviating tuberculosis worldwide by strengthening health systems in tackling TB at global and local levels. The five-year (2015-2019) Challenge TB project, which KNCV leads the implementation in Indonesia (along with the World Health Organization, FHI 360, the American Thoracic Society, and Interactive Research and Development), aims to reduce mortality and morbidity in countries like Indonesia, where the TB burden remains high.